Federico is a double bass player based in Bristol, he is often seen playing with various bands throughout the UK and mainland Europe. 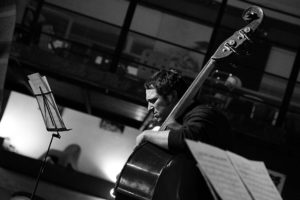 Federico started playing the bass guitar in his teens. The accidental discovery of Mingus’s music was his inspiration in starting to play jazz and the double bass. He later enrolled for a Master Degree in Classical Double Bass at the Santa Cecilia Conservatory of his hometown Rome, while pursuing an active performing schedule in Classical Orchestras, Jazz Big bands and small groups. He graduated under the guidance of one of the leading European double bass player, Daniele Roccato, in 2014. During his studies, he deepened his knowledge of the jazz idiom by attending masterclasses and workshops. Federico was also lucky enough to have the chance to study with many jazz legends including John Abercrombie, Uri Caine, Cameron Brown, Eddie Gomez & Dave Liebman.